A Thanksgiving Tribute to “The Wolf” - P3 Adaptive One of the Power BI Community’s Earliest Visionaries

We recently received some very sad news:  the world lost Mike Miskell, one of the absolute-best humans I’ve ever met, a little over a week ago.  All of the standard phrases apply here for sure.  Too soon.  Tragic.  Shocking.  But that’s not what I’m here to talk about today.

Instead, I simply want to honor a truly amazing person and friend.  Right now there is a fantastic family in NY/CT who should be celebrating Thanksgiving with their fantastic husband and father, and instead they are mourning his sudden passing.

If we, or I, can do anything to help them today, it would be to tell his story through our lens.  Through MY lens, more specifically, but everyone here at P3 Adaptive who knew him had EXACTLY the same sort of experience with him, so please consider my take to be representative.

When we formed this company in 2013, Mike (in his role at Kaman Industrial, a billion-dollar plus in annual revenue, publicly-traded firm) was the first person to hire us for an enterprise-level project.  To this day, “the Kaman Story” is one of the five client stories I tell basically everywhere I go. In 2013, the C-level executives at Kaman had tasked Mike with the single most-critical project on their entire radar.  They needed to get better at pricing their products, to rein in a “margin erosion” problem.  This was easier said than done.  It didn’t just require them to “get smarter.”  It also required them to drive behavior change across hundreds of people, each of which needed to make many difficult and time-sensitive decisions every day.  All of those decisions – thousands per day – needed to be made slightly better in order for the overall needle to move.  And he had this WILD idea that this new Power Pivot thing might represent a path to a solution.  Crazy insightful for 2013!

And in the end, all we did was help Kaman’s stock price go up.  Yawn.  All in a day’s (well, two months’) work for Mike. 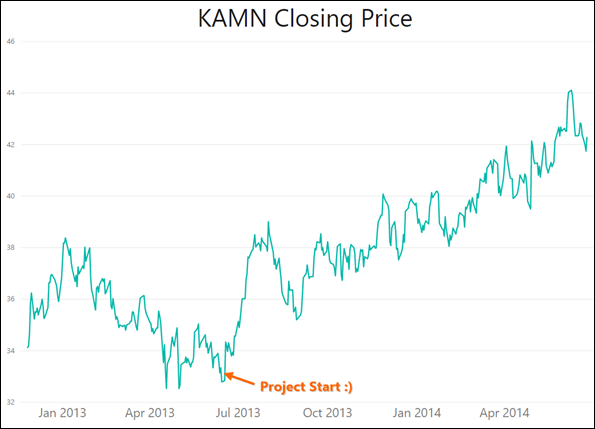 Yeah…  I know…  correlation is not causation.  But don’t underestimate what someone like Mike can do.

As I got to know Mike, I learned that this was par for the course:  when there was a big problem, the execs called Mike.  I’d spent most of my career up until that point safely ensconced in the software engineering trenches, far from the executive levels, and it was downright fascinating to watch Mike operate.  He had a serious and formal job title at the time – Director of Process Improvement, which honestly sounded pretty boring to me.  But that was just a title.  Because hey, to run in Mike’s world of industrial distribution and manufacturing, you NEEDED a serious and sober job title.

But his REAL role was “The Fixer.”  Got a big problem?  Seems impossible to solve?  Put Mike on it.  He solves anything.  And then comes back for more.  Everyone knew that.

And this got me thinking about Winston Wolf, the “fixer” from Pulp Fiction.

Mike didn’t strike me as a Pulp Fiction fan (in fact he’d never seen it), but he LOVED the comparison when I shared it with him.  Embraced it.  Had fun with it.

He even got a chuckle about me bad-photoshopping his face over Harvey Keitel’s and then publishing it for thousands to see: 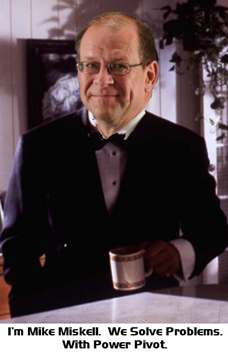 Thanks to the things we learned working with Mike, “The Wolf” became a Favorite Client Archetype for us over the years, as we met a number of other Executive-Level Fixers, each with their own distinct job title but a very similar “real” role.

But Mike was the first, and he was always so generous with his time and thoughts, it ALLOWED us to learn about “Wolves.”

Never say “my tech can beat up your tech.”

ROB:  “So Mike, we all know Power BI is gonna replace Cognos as the official BI tool at Kaman…”

MIKE:  <smiling> “No not at all!  There are things Cognos does better than Power BI, and things Power BI does better than Cognos, and we’re just gonna keep using each tool for its strengths.”

ROB:  <laughing> “Yeah yeah yeah, excellent politician-speak.  But there’s no one here but the two of us!  You can level with me!  Cognos is going away and we both know it!”

MIKE:  <still smiling, not the least flustered>  “No no no, Rob…  these tools are very different.”

ROB:  <laughing harder>  “Yep they’re different, one is just better, we both know it, so why won’t you break character???”

MIKE:  “Hey Rob guess what!  They just put me in charge of ALL the BI at Kaman, and you know what?  I think we might retire Cognos!!!” One of my favorite Mike stories played out over the course of YEARS.  It was an ongoing inside joke of sorts.  Kaman had long been using a traditional BI tool called Cognos.  The Margin Scorecard project that we built with Kaman was originally “given” to the Cognos team to address, and said Cognos team had cried uncle (because hey, traditional BI doesn’t work, no matter which software vendor you chose).

So Cognos was still the answer for Kaman, for everything EXCEPT the Margin Scorecard, which we built in Power Pivot.  And the smashing success of said scorecard, well…  I’m sure that surprised the Cognos team just a bit.  I suspect they were betting “if we can’t do it, neither can so-called Modern Excel.”  In their shoes, I would have been surprised too!

This created a tension behind the scenes at Kaman – the age-old “but we have an official BI tool, please stop using that newfangled interloper tool” tension.  And the way Mike navigated that…  I will forever be in his debt, because I never saw things quite the same after watching him manage that situation.

Every time I saw Mike, I’d needle him about this situation, and every time, it went down as illustrated above.  I could always see the glimmer in his eye, even as he denied.  He knew.  He agreed.  But he ALSO knew that it would never help ANYONE to say such a thing out loud.  It drove me nuts that he wouldn’t “level” with me, but he was doing both of us a major service, longer-term.

“Never try to convince anyone that Power BI is a better tool than other tools, even if YOU believe it.  Instead, just go build something that was otherwise impossible, and KEEP delivering the impossible, without EVER picking a fight with the proponents of the other tools.  Tell them you’re happy to switch to their tool of choice as soon as they’re ready to duplicate what you’ve built in Power BI.  They’ll never get around to it of course, but in the meantime, no one is served by picking a fight.”

-One of our company’s core recommendations, learned by watching Mike.

I’ll leave you with a few quick additional Mike stories…

On one of my visits to Kaman HQ, I witnessed Mike debugging a Fax Server of all things.  Not just ANY fax server, of course, but one that sent and received hundreds per day as part of the customers’ ordering process.  So, huge crisis?  Has nothing to do with BI or Analytics?  Yep, Mike’s on it.  I’d known him for years at this point and I was still laughing in admiration as he rallied the troops to solve a deep and hairy tech problem that he himself knew ZERO about…  and yet, I watched him untangle the web of people and problems and get it mitigated. Hosted a “Private Summit” With Microsoft in 2014! Yeah.  Mike Co-Organized a Private Summit Between Us, Some of Our Other “Wolf” Clients, and the Engineering Leaders from Microsoft

We’re all fond of the hand-drawn art style here, even when it means hybridizing several images into one.  So it was only fitting to “commission” one such piece for our good friend Mike:

Happy Trails to a Fabulous Colleague and Friend