Setting the Stage: a “Risk”

This is one of those things where I spent a lot of time figuring out how to do something non-obvious.  And hey, that’s usually a good thing to share!  Keeps others from burning needless time, pushes the envelope a bit, inspires “riffs” and improvements on the core idea, etc.

But there is ALSO the risk that there was a much easier way to do this, in which case I will end up feeling a little bit silly when the avalanche of comments come in starting with the phrase “why didn’t you just…”

I gladly accept that risk!  While the rest of my company LONG ago moved 100% into the Power BI environment, I still clung to Excel, muttering things like “cold dead fingers.”  But this recent project has given me a REASON to embrace the Power BI report canvas.  Besides, hacking the Excel environment and “inventing” new things was always one of my favorite things about Excel in the first place.  So I’m kinda thrilled to be learning the same sort of “knack” in another, highly-capable environment.

For years, I’ve been seeing infographics like these in the sports world, and since I’ve been working on a sports-themed Power BI project, I thought I’d give it a shot: Some notes on each:

A (Necessary?) Disclaimer About Visual Clarity

Yes, I know that NONE of the infographics above is a scientifically “good” comparison tool.  Too noisy, too flashy, not clean…  but every now and then you DO need to cater to your audience.  Engagement is the first step in the comprehension funnel, and in this particular example, yep, I’m trying to capture the eyeballs of an audience that likes this sort of thing.  The style of #4 is a decent compromise in this case.  Know your audience. Your mileage may vary, but my experience with custom visuals often goes like this:

Yes, there ARE some pretty solid custom visuals that I use frequently.  Chiclet Slicer by Microsoft and Sparkline by OKViz are two examples.  But most times I stray into new territory, I burn a lot of time with nothing to show for it.

This time was no different.  I did not find a visual that just “did” the two opposing bar charts for me, but I did burn some time before giving up.

Second Step:  Realize I Can Probably Just Use Bar Charts OK, but it IS a bit tricky…

In MOST cases, I think you’d put two slicers on the report – one for the left entity and one for the right. And then the user is free to compare ANY two entities of their choosing.

And that would require two separate tables – one to populate each slicer – otherwise your selection on one will drive the other slicer to match, and you’ll always be comparing a single entity to itself.

In my case though, I don’t want to let the report user arbitrarily select two different QB’s.  I want them to see which QB’s are going head to head THIS week!

So I can get away with a single table…  with a twist.

DimSchedCurrentWeek: This is My “All in One” Slicer Table

I am not going to get into how I constructed this table, or how it updates each week, because it’s too specific to my particular data sources to be terribly helpful.

What you DO need to know, however, is how it relates to my data/fact table… 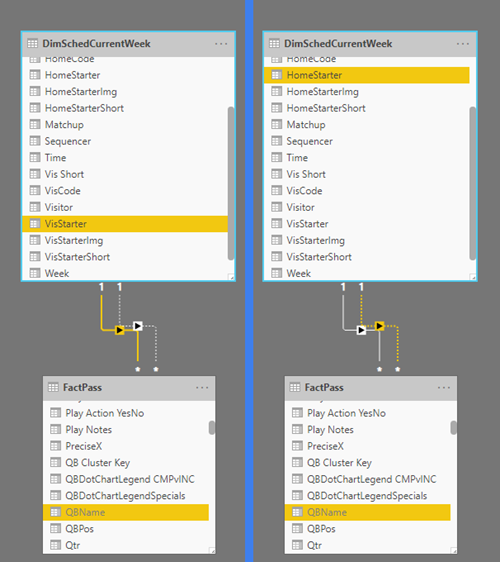 My Slicer Table Has Two Relationships to my Data (Fact) Table:  One Inactive by Default

OK, and to make things SUPER clear, here’s how it all ties together… 1) [Matchup] column is used to populate the slicer
2) When a slicer selection is made, by default that filters the FactPass table to the [VisStarter] QB.
3) But if the inactive relationship is activated instead, FactPass will get filtered by the [HomeStarter] column.

Pairs of Measures:  One “Normal,” One with USERELATIONSHIP

In the previous image, you’ll notice that [VisStarter] from DimSchedCurrentWeek “owns” the default relationship to the FactPass table.

So whatever “normal” values we have in our model, we can use those to represent the Visitor (aka the Left-Side Entity).

So for instance, here’s an existing “normal” measure from my model:

It doesn’t matter what those SUM measures (the inputs to the DIVIDE) do – I’m just showing you that this is a pretty standard arithmetic measure.

And that measure will evaluate for the Visitor QB (left hand entity in the report) by default, since my default relationship selects for the Visitor.

But what about Home QB?  We need to define a new measure for that right-hand entity:

Yep, just take the original normal measure, and deploy the USERELATIONSHIP function to “activate” that other (inactive) relationship – the one which “flows” from the [HomeStarter] column (rather than from [VisStarter]).

I need to do define a USERELATIONSHIP measure for each quantity I want to use in my infographic, but I’ll spare you the repetitive formulas and just show you that I have six of them: Is that it? Heh heh, not quite.

Nope.  If that’s all I did, I’d be headed down the road toward THIS sort of result:

This is NOT What I want.

Remember, I just want the “superior” entity to have a bar, AND the length of that bar to be proportional to the magnitude of that entity’s advantage.

This will return a positive value when Home is “better” (since higher numbers are better for Accuracy), and a negative if Visitor is better.

Of course, I need all six of these too… Six of These Subtractive Measures, Too

Subtleties in those Delta Measures: Flipping the Sign & Scaling

Of course, SOMETIMES smaller numbers ARE better.  Like…  Interceptable passes.  Those are bad.  You want smaller percentages there.

So for THOSE measures, you need to flip the sign, and I do that by multiplying by a negative value…

Why multiply by –4 instead of –1?  Well, the “scale” of the Interceptable measure is small – down around 5% on average, whereas Accuracy tends to be much higher, in the 60-70% range, and that made Interceptable look like “no big deal” by comparison – which is NOT true!  Via trial and error, I found that multiplying the delta by 4 put this on a reasonably-comparable scale to the deltas in Accuracy.

Oh my sweet Summer child.  No, I am not, but getting close.

Guess what happens when you place multiple measures on a stacked bar chart?  Yeah, not what we want for Tale of the Tape! 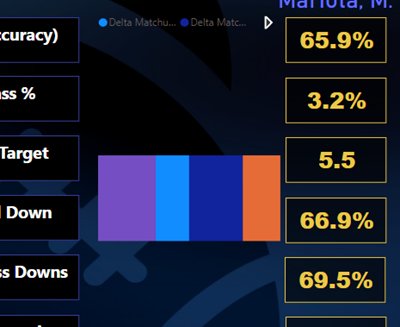 Multiple Measures on a Stacked Bar Chart – Yep, they Stack.
(And we want them laid out as separate bars in parallel)

OK, so we need to introduce some phoney-baloney Axis column…

We Need… a Disconnected Table! Woo woo!  We’re going for Bingo here!  Or Yahtzee.  Or something.  Lots of micro-techniques in this macro-technique!

That’s right folks it’s time for a disconnected table – so we can “trick” the bar chart visual into displaying our measures as separate bars.

Disconnected Slicers/Tables will always have a special place in my heart.  Click here for a list of the many relevant articles penned on this site over the years, in fact.

I suggest using the friendly little “Enter Data” button on the Home tab of the Power BI ribbon: I don’t need anything fancy – just a six-row table.  Why six?  Because I have six measures I want to use in my visual.  You may need a different number of rows.

Once I have THAT in my model, I then add a “branching” measure – one that disguises the fact that I’m using six different measures…

Depending on the “Selected” Value/Row of My DummyDC Table,
This Branches into My Six Delta Measures

Why did I call this measure “[BooYah],” you ask?  Well, I tend to do that when I’m nearing the end of some long-running magic trick.  Gotta keep the enthusiasm up, and what better way to do that than naming measures in a celebratory fashion?  OK fine…  in a production environment you’d want this to be named more descriptively.  But this is my own personal passion project so…  [BooYah] it is!

Remember that whole “don’t display the value for the inferior entity?”  Well, I need some IF action for that, so I create two more measures…

Set up the charts!

Phew!  Ok, now to set up the visuals… Notice how each chart overlaps underneath the labels in the center? Yeah, I had to do that in order to make the 0-axis align with the edges of said labels.

The rest of the setup is pretty simple… See Below for Explanation of Each

1) and 2) – these ARE actually custom visuals!  Image by Cloudscope. They use separate columns from DimSchedCurrentWeek, URL columns for the Vis and Home QB respectively.

3) This is just the built-in Slicer visual.  Set to Dropdown of course.

The labels in the center are just text boxes.

And EVERY “real” visual on here “listens” to the dropdown slicer of course.

Whatcha think?  I now await the dreaded “why didn’t you just…”