The Man, The Myth, The On-Prem Server Guy…

Chris Finlan and I have known each other for some time now. He emailed me out of the blue 3.5 years ago and we’ve been in touch ever since.  In 2014 he was a Technical Sales Professional at Microsoft, based out of the DC/Philly offices, but for the past 2 years he’s been a Program Manager (my old job) at MS HQ in Redmond, WA.

An Excel Pro in a former life, Chris knows the score on how things go down out here in the Real World.  I find that incredibly valuable, and we’re all lucky to have people like him working on the software that powers our careers.

Chris works on some very important stuff these days, and he “sat down” with me for a virtual interview.

The On-Prem Alternative to the Power BI Cloud Hotness!  A Power BI PBIX Rendered in the Browser, by an On-Premises Server!

So Chris, what is the name of the server product you work on? Power BI On-Prem? SSRS vNew?

It’s called Power BI Report Server. It’s even got its own landing page on the PowerBI.com website

And what do I have to buy in order to get it?

You can buy Power BI Premium and get rights to it, or you can buy cores of SQL Server Enterprise Edition with software assurance.

The thing that’s most exciting (to me anyway) in this latest preview is Web Excel rendering (sometimes called Excel Services or EWA). It’s using Office Online Server just like SharePoint 2016 is doing, but we’ve simply narrowed the supported scenarios down to Excel only, just like the Power BI service. 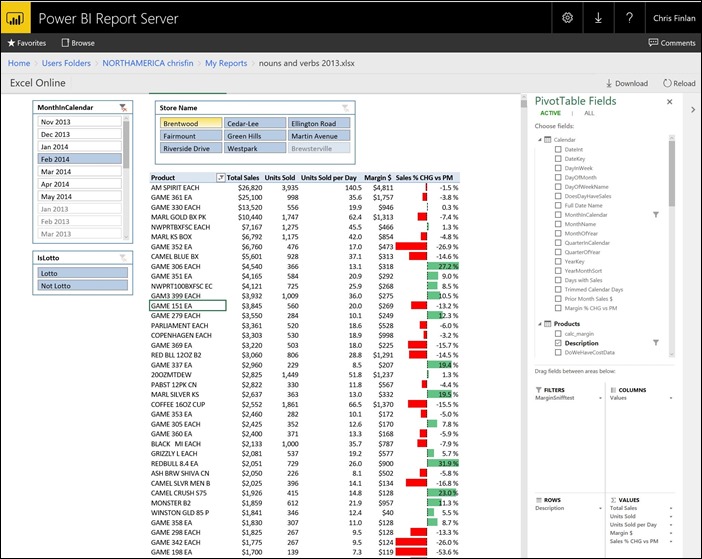 Ooh!  And an Excel Power Pivot Report Rendered in the Browser by the Same Server.
(And just as importantly…  no SharePoint required here!)

What motivated you to do the work to add this to Power BI Report Server?

This has been something has been discussed for years – the idea you could have a single server that simply runs the Microsoft BI stack without having required external dependencies on something like SharePoint. Excel represented the final piece of that puzzle, so between that and a desire to have a similar story for customers when it came to Excel with the Power BI service, we pushed ahead.

Well, that and being bugged about it for the past 18 months.

I appreciate you tolerating my long-running “gimme EWA” narrative.  I ran some massive Power Pivot for SharePoint farms in a former life, and it was not pleasant.  Is Power BI Report Server easy to install and configure?

We tried to make it as easy as possible for folks while still acknowledging that Office Online Server still requires you to do a few things in PowerShell to set that up. The feedback so far is that it’s much easier to setup for folks than what was required in the past with SharePoint, so that’s been great to see.

So is it fair to say your server is also a web server? Do I have to futz with IIS settings or is it appliance like?

No, Power BI Report Server takes care of that for you basically. You simply do the same things you’d do in SSRS (SQL Server Reporting Services) once you’ve installed it by walking through the configuration experience, and you should be good to go.

Can I embed the Excel Web control in other pages, suppress the toolbars, etc. like I could with SharePoint?

You can only embed it in an iFrame and hide the Report Server in chrome using a simple URL pattern (rs:embed=true), so we have basic embedding support but that’s all. We essentially have the same experience as the Power BI service for Excel, so it’s more like that vs. the full Excel Web Part for SharePoint.

That’s actually a much better answer than I expected, especially for a first time out.  Kudos!

Your server also runs PBIX files right? And can deliver to mobile devices?

Indeed it can (as pictured at the top of this interview) – both Power BI Reports and Mobile Reports based on the Datazen technology we acquired and were first introduced in the SSRS 2016 are supported and available through the Power BI Mobile App. What kinds of customers are using versus Power BI cloud?

For a lot of customers, especially in certain industries, they still have certain groups that require a solution to run in their data center, so going with something like Power BI Premium gives them rights to run in the cloud AND on-prem with a P1 SKU. We also have customers that are heavy SSRS shops that just want to take advantage of the additional capabilities of Power BI Report Server, since they have the rights to run it based on their existing Enterprise Agreement.

Yep, we run into those kinds of companies all the time.  We encourage Power BI cloud where possible, but for some industries or orgs, it just isn’t politically or legally feasible.

So… can we just call your server “PBI On Prem?”

OK fine, we can’t call it that today. WHEN can we start calling that?

Never, and I think this is actually an important point to touch on. There’s no plans to have parity between the service and the server for things like dashboards, Q&A, etc. The focus of the server is and will continue to be “Reports”, hence the name Power BI Report Server.

Oh my gosh while trying to close ONE can of worms you have opened up a BIGGER one! What does “report” even mean?

Power BI “does” reports. Everything’s a report, in some sense, and everything’s a dashboard. This is a longstanding impossible semantic nuance. In any event, how we frame the report conversation with customers relates back to the post in October 2015 and how we defined reports in that roadmap discussion. That seems to make sense for most folks I talk to around this topic. Is this Web Excel Example a…  Report?  In the Real World, Yep.
(But MS still insists on re-purposing our perfectly-good nouns – hey, they make awesome software.  Naming doesn’t HAVE to be a strength.)

(Just so you know, folks, I have a hobby, and that hobby is called “Make Chris Finlan Uncomfortable.”  It would be inauthentic of me to NOT inject some of that here, and I still think “Power BI On-Prem” is a fine name for this awesome product, but that’s not for me to decide – lots of big strategic stuff at Microsoft, behind the scenes.)

This new functionality is in preview… when does it become “real?”

In the next few months.  In the meantime, check out the preview – go ahead and download it below: