The 3rd Most Common Button in Data Apps is… - P3 Adaptive

A little bit of food for thought today, delivered in a pictorial/humorous style but with a serious point. A Running Joke That Never Gets Old

I’m quite fond of the following one-liner that I’ve been using in presentations for awhile now:

“Export to Excel is the third most common button in data and business intelligence apps…  after OK and Cancel.”

That generally brings laughs.  It’s ironic of course, since so many business intelligence suites are marketed in part on the principle of “stamping out spreadsheets.”  But even the proudest BI suite succumbs to that ever-present force:  customer demands.

And so they find themselves, over and over, opening a door to the “dark side.”  Let’s take a tour shall we? And I really like this marketing point here, about how version 9 added richer support: Cognos doesn’t mess around.  Why settle for simple export when you can write an entire addin to push data into Excel? (There is no extra charge for rhymes of such quality) I’m including them because a few members of our team came from PivotLink, and because Pivotstream was using PivotLink until, um, yeah…  until I showed up.

One-upping QlikView, they not only use the XL icon, they give it top billing for the entire export dropdown.

Hey, in fairness, Microsoft products do it, too.  Here’s Reporting Services: 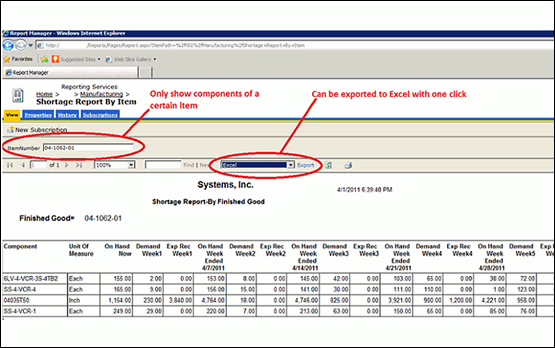 Even Excel Services itself offers “Download Snapshot” which is really just Export to Excel…  from Excel! Why does everything have this button?  Why is export to Excel such a “must have,” even for tools that claim to “break” an organization’s dependence on Excel?

First, this reinforces for me is that Excel remains the common denominator in business analysis and reporting.  If that sounds controversial, try building and selling a BI or reporting tool that lacks export to Excel, and let me know how that goes.  The companies above all produce good products, and they are smart companies.  They implicitly acknowledge what I am saying  (with their feature decisions) without explicitly endorsing it (there’s no upside in them doing so, for sure).

Export to Excel also implies an undeniable “drift” away from “one version of the truth.”  When I export from a BI tool to Excel, and perform some calculations “in the margin” of the exported data, that is a forked, one-time analysis.  It is not captured in any public data model.  It lives on my desktop.  It represents a “drift” away from the rightly-coveted single version of the truth.

PowerPivot, of course, is not immune to that problem of drift.  As I showed above, even server-based Excel has the ability to export snapshots.

But there is an opportunity here, with PowerPivot, that the other tools will always lack.  With PowerPivot, an analyst with proper permissions can build their “in the margin” calcs directly into the PowerPivot workbook itself.  All the flexibility and familiarity of Excel can be harnessed, but then shared and maintained centrally on the server.

Just as with the other tools, it is undeniably better to build that incremental business logic into the PowerPivot model itself (in the form of new measures, tables, etc.).  But sometimes that just isn’t practical.  Often that is true, in fact.  If it wasn’t true, these other BI tools wouldn’t have the export button!

And once we acknowledge that truth, that “last mile” calculations and similar extensions are common and inevitable, a tool that embrace them directly holds an advantage.  I find that pleasantly and rebelliously ironic, that an Excel-based BI tool can hold an intrinsic advantage in “one version of the truth,” which a few years from now we will refer to as “a former weakness of Excel-driven BI.”