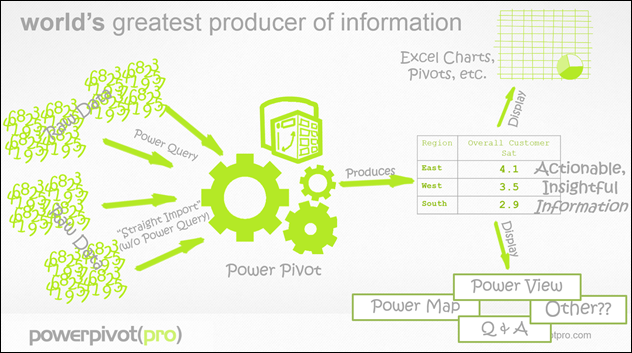 Power Pivot is the Engine that Turns Data Into Information!
But We Can’t Understand This Properly Without Examining the Three Big Lies of Data

So many things to say this week. Let’s jump in.  Here are the questions I ultimately aim to answer, which are questions I get basically everywhere I go:

In order to answer these, first we must confront some insidious lies that we are told every day. The world of data, today, is clouded by Three Big Lies.  These lies originate with all of the tools vendors – Oracle, IBM, Tableau, etc., and yes, Microsoft too is very much playing along.

So while the lies COME from the vendors, the PROBLEM, really, is with US – the people who BUY the tools.

No, I am not suggesting that we stop buying data tools!  Computers, after all, are fantastic at data.  Data is basically the ONLY thing that can go into a computer and then come out better.  (Computers have a much harder time “improving” IDEAS, for example).

Instead, I am advocating that we become smarter buyers of data tools.  And then the vendors themselves can start telling a more accurate and honest story, because we will be ready for it.

No more suspense, here are the Three Big Lies: The Three Big Lies of Data:  We Hear Them ALL the Time.

So What’s the Truth?

For starters, let’s try a few things that I believe are Truths:

Your Mission:  Ruminate/Comment While I Refine Part Two

I don’t want to rush this, it’s too important.  So, I’ll resume Thursday.  In the meantime, noodle on this a bit and let me know what you think OK?

The last parting thought, for now, is that I think the people reading this ALREADY know that the three lies are indeed lies, and you ALSO knew those three truths before you read them here.

So really, my mission here is to “crystallize” things you already know, and to give us all concrete ways to talk about them, so that overall, we can move the conversation about data (and tools) to a smarter place.

Part Two:  The World Doesn’t Have its Numbers >>