Much-Coveted by Classic Sneaker Collectors:
The Power Update Limited Edition of the Air Jordan One

On Tuesday of last week, a popular SharePoint blogger tweeted the following, and it picked up traction as the day went on:

Coincidentally perhaps, something funny happened the day before – something that reminded me of a legendary story from the 1980s.

The “Ban” That Launched a Billion Dollar Biz

As the legend goes, the first time Michael Jordan wore his red-and-black Air Jordan shoes in an NBA game back in 1985, the NBA issued him a warning and a fine ($5k per game) if he wore those non-conforming shoes in any future games.  Nike seized upon this, launched the ad campaign above, and the rest is history:  Air Jordan branded shoes sold $2.4 Billion Dollars in the US as recently as 2014, many years after Jordan retired from the NBA (and even more years since he was actually, um, a good player).  And Jordan himself still gets paid $100 million a year or so from these sales!

It turns out, they may not actually have been truly banned (it may have been another shoe!), but no matter:  The money made by Nike (and Michael Jordan) every year to this day is real and spends just fine.  You can argue that the NBA is better off for all of this, too.  It’s hard to dispute the marketing power of one Michael Jordan. Multiple people sent me a link to that post last week.  Not one of them took the MS post seriously – the reactions ranged from “oh boy, Rob’s gonna get ‘em good for this one!” to “I can’t wait for the snarky blog post on THIS one!”  Which, when you think about it, is really no range whatsoever.

And yeah, there are some in that post that I find a bit “off,” like “If you need to refresh your PowerPivot workbooks more than once a day, then you likely need to find a different BI solution to display your data.”  Or my personal favorite:  recommending that you set your Excel workbooks to refresh on open (which in our experience leads to absolutely unacceptable load times – as long as one minute while the user waits – and positively crushing server loads).  We at P3 Adaptive strongly disagree with those two pieces of advice, for sure.

But it turns out, I think the Microsoft support engineer (Rick A.) is overall correct, and has a great point:  you really SHOULDN’T use unsupported third-party refresh tools!

Does it surprise you to hear that, since P3 Adaptive (and I personally) are partners in the development of the Power Update product?  Well brace yourself… Example:  “Hyper-Productivity Tool” Slack is Supported by the Company
Who Built It, Not By Microsoft – Just like Power Update!

The more I thought about it, the more I realized that the TechNet post wasn’t even about Power Update.  Why?  A few reasons:

So, What IS that TechNet Post About?  DB-Hacking Scripts. Back in 2010, we discovered, like many others, that you could “hack SharePoint’s brain” and trick it into running refreshes multiple times a day, or even on-demand, by “injecting” a record into its list of refresh jobs – by writing directly into the SQL database that tracks such things.  SharePoint was none the wiser at that point, and would dutifully run the refresh.

There are now many scripts and free/unsupported utilities which perform that hack for you.  Go google them, they’re everywhere.

But those scripts/utilities DON’T work well, and we eventually abandoned them altogether.  That, in fact, is when we embarked on the Power Update development project – to take the load off of SharePoint altogether.

And we built Power Update, as a superior alternative to these scripts (and to the native SharePoint refresh service) for these reasons:

So, Rick A from Microsoft, I agree with you.  You want to run your refreshes with as little impact on SharePoint (and Analysis Services!) as possible, AND you want a robust, supported tool with a team who stands behind it.

You want something like Power Update, in other words. It checks all the boxes:  more reliable, more flexible, and fully supported.

Furthermore, it gets better every month, just like Power BI!  The dev team has added features like email notifications, DAX-driven exception alerting, a 100% free version, support for Power BI itself, direct load into SQL as an SSIS alternative, VBA macro support…  the list will grow as time goes on.

Oh and don’t forget, Power Update is the ONLY way to run Power Query refreshes on a scheduled basis.  Microsoft has yet to provide even a “once per day, crush our server with a refresh” feature.  Sigh.  Which brings us to the next point…

Power Update MAKES MICROSOFT MONEY, in other words – by filling important gaps in their platform that none of their engineering teams currently has resources to fill.  We have many clients (and stories from the real world) about Power Update making the overall MS platform work for customer needs… so that it (the MS platform) delivers on its tremendous promise and generates tremendous overall value.  You’re welcome, Microsoft!  We are happy to play a part.

What About the Power Pivot Gallery? 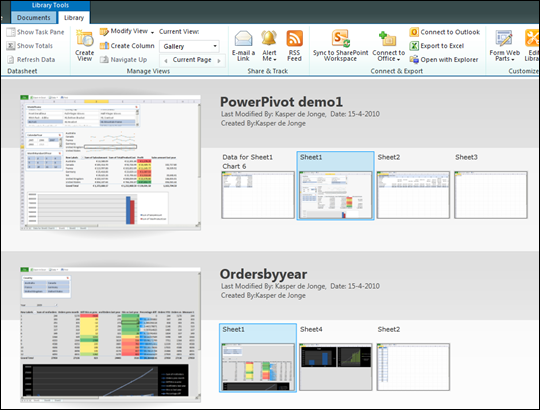 Power Pivot SharePoint Gallery:  If You’re Using This, You Should Consider, Um, Stopping.

One thing in Rick’s TechNet post DID make me wonder a bit though:  maybe the Power Pivot Gallery gets “weirded out” by frequent refreshes, whether you run them on SharePoint OR via Power Update?  Off the top of my head I don’t know, because we haven’t used the gallery in years.  (We’ll look into this pronto of course, first time we’ve ever heard of it, and I’m not at all sure there is a connection – the Gallery is super flaky to begin with, see below).

But honestly I think the Gallery ITSELF is the thing that should NOT be supported by Microsoft.  I was there, at Microsoft, when it was built.  The dirty secret here is that the Gallery was built for “demo standards” and was never engineered to be a full production feature.  In my opinion it never should have made it into the released product.  It was built on an outdated technology (Silverlight), and wasn’t even diligently thought through as a production feature.  It takes FOREVER to load, can only show you two workbooks at once, is forever doling out broken thumbnail images…  it’s a disaster even when it’s “working.”  Everyone eventually abandons using it.

This isn’t some convenient new opinion on my part, either:  back in 2010, at my former company, we developed our own alternative to the Gallery, because it was so completely  unusable.  It never once was used in production during my three years working there.

So I do feel bad for anyone (such as Rick A) who has to work with the Gallery on a daily basis.  I wish we had never built that thing back in 2008-2009 back at Microsoft in Redmond.  Sorry Rick