Assortment of Quick and Fun Topics

I keep something called Ye Olde OneNote List of Future Blog Topics.  You know, I think of something and go “ooh, that would be a good thing to write about,” so I add it to YOOLOFBT.

Problem is, said list sometimes grows a lot faster than the rate at which I produce finished blog posts.  So…  good topics just get buried sometimes.

Today, let’s make sure a few of those topics get to see the light of day.  Like children who’ve been cooped up in the house all winter, they need to go outside and play in the yard.

Last week’s post on Datazen positively shocked me with the number of page views it got.  It set the all-time record for single-day views of a given post, AND that traffic also led to the single best day for overall p3adaptive.com traffic.  (A rising Datazen topic lifts all posts.  Something like that.)

And it wasn’t close, either.  Both new records eclipsed the former records by healthy margins.

The take-away, I think, is that mobile visuals SELL.  This excerpt from last week sums it up nicely:

So if you’re trying to increase Power Pivot buy-in at your company, Datazen is worth a look.  It’s a gateway drug. If you haven’t tried it yet, you should download and try it out today. Seriously, I wouldn’t say that unless I 100% believed it.  It changes your whole relationship with Power Pivot:

I’ve particularly enjoyed all the Microsoft employees who’ve been telling me how much they use Power Update.  (It’s an essential component of every Power Pivot-backed Datazen deployment, for one example).

Wow, I was STUNNED to hear about this.  A student in my class last week mentioned it: 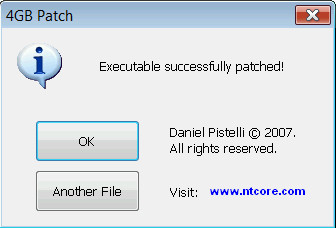 The theory is that you can run this utility and it “fixes” Excel.exe (and therefore Power Pivot) so that 32-bit Excel is no longer limited to 2 GB of RAM, and can now use 4 GB.

4 GB may not sound like a lot, but I used to run 64-bit Excel/Power Pivot on a laptop that ONLY had 4 GB or RAM, and it ran FLAWLESSLY.  Even on 300 million row workbooks.

Turns out that Excel plus the Power Pivot engine and addin tend to gobble nearly a full 1 GB on its own, before you even start loading data.  So 32-bit Power Pivot only has 1 GB of RAM to work with.  If you jump to 4 GB, that means Power Pivot now has three times the useable RAM (1 GB vs 3 GB).

The file size limit for Power Pivot is 1 GB anyway, and that tends to translate to about 2-2.5 GB of RAM – which is less than 3 GB yes?  So in theory, 4 GB of RAM should be all the difference in the world.

So again, in theory, this should fix your out of memory issues, your file corruption issues, basically everything.

So, if you’re willing to try this out, give it a whirl and let us know how well it works for you.  This could be a BIG deal.