Tales from the Trenches: My personal experience with Power Update (by Tim Rodman) - P3 Adaptive

***Update #2:  There is now a forum for Power Update questions, located here.

Intro from Rob: I’m what you might call a “gift horse optimist” – strongly positive outlook, but when the hoped-for thing finally arrives, I find myself closely inspecting it, testing it, before I trust it enough to advocate it to others.  I went through this same process with Power Pivot itself – I “saw” its gamechanging power in 2010, but it was a full eighteen months before I finally dropped all disclaimers and just started calling it far better – period – than anything we’ve had before.”

Similarly, I’ve long known that Power Update would be a MAJOR win for us in the Power Pivot and Power BI communities.  But I am willing to advocate it now only because I’ve watched others – like Scott, and Tim below – use it successfully, in production environments, in recent months.  (Also see my post last week “introducing” Power Update in case you missed it).

Take it away, Tim…

I first found out about Power Update two months ago via a LinkedIn post by Christian Floyd.

It took me a while to realize that he wasn’t talking about a theoretical future idea, but an actual product, something that exists today. Click the picture below to see the entirety of my foolishness. It wasn’t until I talked to him directly that I realized what Power Update really was and I was immediately interested.

He got me a beta version of Power Update and I began testing it at the company I work for: a manufacturing company in Cleveland, OH called The Robbins Company.

We started using Power Pivot at The Robbins Company back in 2013 and I wrote about our experience on this blog (click here).

We really like Power Pivot. It is more powerful than our existing report writers (Crystal and SSRS) and it’s easier to use (a rare combination). So we were excited to start down the Power Pivot path.

My colleague, Pete, and I were the biggest proponents of Power Pivot in our organization, but we began to teach others too. For a while things seemed to be taking off, but the manual refresh kept pulling us back down to earth. It just seemed so primitive for such an advanced piece of reporting software to require a manual refresh.

At the Robbins Company, Analytics are Seldom…  Boring.

Once we hit about 20 production reports, our enthusiasm for Power Pivot began to wane because it became very tedious to manually refresh the files every morning.

We looked at Power BI v1 and Pivotstream, but I couldn’t convince management to spend tens of thousands of dollars annually on either of these solutions.

When I got an early trial version of Power Update two months back, I was able to install it and point it to some Power Pivot files for testing. The whole experience took only a few minutes. 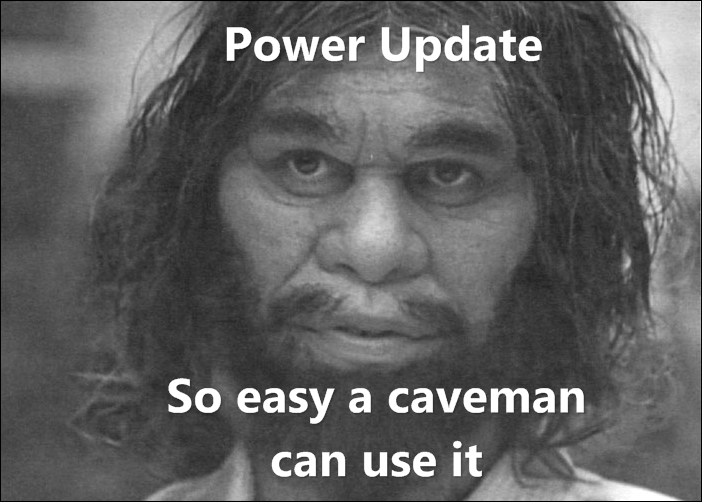 Then it was just a matter of waiting for the scheduled refresh to happen overnight.

When I checked our SharePoint document library the next day, all the files had a last update date of the previous night (so far so good). Then I compared the files to the copies from the previous day and noted that the data had indeed changed (looking very good), and finally I refreshed the files manually and confirmed that the data didn’t change because it had already been updated by Power Update (sweet!!!).

Power Update is a very simple concept: easy scheduled Power Pivot refresh for an affordable price. It reminds me of WhatsApp, the text messaging app for phones. Sometimes the best applications are the ones that just do one thing, but they do it well.

I provided some feedback to the Power Update team during the beta version related to the user interface and a couple of bugs.

I was very impressed with the response time of the team (usually a new version available within a couple days).  I grew to realize that they really know what they’re doing.

The Unintended Benefit of Power Update…

I have become excited about Power Pivot again!  Around 20 reports seemed to have been a ceiling for me because manual refresh took so much time. But now Power Update has removed that ceiling.