Self Serve BI Adoption: the Relative Roles of People, Technology, the Business, and IT - P3 Adaptive

They may take our lives, but they’ll never take our freedom Self-Service BI and Power Pivot.

Brief Intro from Rob:  Tim has a great “backstory.”  He found out about Power Pivot in the “usual” way – via a completely random coincidence.  I taught a private class to a firm here in town a couple years back, and one of the attendees (a guy named Andy) lived a few houses down the street from Tim.  Sitting outside at a summer barbecue, Andy mentioned Power Pivot to Tim, Tim said “what’s that?” and six months later Tim was a speaker at our Modern Excel User group.  I think he has some very interesting things to say here – very introspective and honest.  Worth a read for everyone.

Take it away Tim…

In my opinion, PEOPLE are the biggest barrier to entering the Self-Service BI age, not technology.  Note: for the purposes of this post, I’m going to focus on Power Pivot since this is appearing on a Power Pivot blog.

I have been reading Rob’s blog here for about a year now. One thing I appreciate about Rob is that he really believes that Power Pivot is for the Excel Pro, not just the super geeky IT professional. I have been slowly implementing Power Pivot in my organization for the past six months or so and, based on my experience interacting with non-techy users, I have to agree with Rob that Power Pivot really is for the Excel Pro. Recently I was wondering, why aren’t more companies experiencing this phenomenon? Then it dawned on me, it’s the IT professionals in many cases who are the real barrier to entry for Self-Service BI and Power Pivot. The reason I’m not experiencing resistance from the IT department in my organization is that I happen to be in the IT department.

It’s very easy for the IT department to start thinking too highly of themselves or to exercise too much control over their organization’s data. Some IT people see themselves as the guardians to all information in their company. They watch their users like a hawk to make sure they aren’t using non-IT sanctioned products like Dropbox for sharing files or instant messaging for communicating with other employees. This philosophy finds its way into reporting as well. How many times have you heard something like this from an IT person?

The truth is: this stuff isn’t as complicated as many people make it out to be. If you don’t believe me, start showing Power Pivot to others in your organization and watch it take off. I think the real problem is that many IT people are scared of losing power. They like to be able to work magic without others really understanding exactly what it is that they do. They don’t want the bright light of Self-Service BI to shine on what they are doing because people might discover that they aren’t as magical as everyone thought. They clutch their reporting tools in their hands like Gollum clutching the ring in Lord of the Rings because they know that information is power. 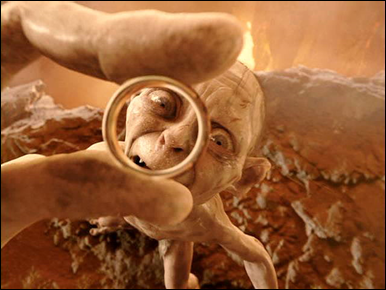 The peril of clutching IT power too tightly

An IT professional CAN be a big asset if you are trying to introduce Power Pivot to your organization. They can help make your data easier to access. They can help users form meaningful relationships between different types of data. But, it’s also possible that they can secretly sabotage your attempt at Self-Service BI. The IT department has a lot of power, and much of that power comes from their knowledge being shrouded in secrecy. Here are some signs that you have an anti-Self Service BI mole in your IT department:

This might seem like a harsh critique of the IT professional, but remember:  I *AM* an IT professional.  It takes one to know one.  I believe that at least some element of this philosophy has been ingested by every IT professional, myself included.  IT departments have power and power corrupts.

The irony is that you are actually better off as an IT professional if you share your magic tricks with others because you build connections with people and you gain prestige with others by making their lives easier. I’ve noticed this when doing ERP implementations. During an ERP implementation, there are always those who resist putting their information into the ERP system because they think that they are going to somehow become obsolete. They think that the only way they can remain valuable to the company is to keep what they know in their head, on sticky notes, or in some cryptic filing system that no one else can understand. That way they become the gatekeeper to a world of information, thus ensuring job security for themselves in the future. The reality is that you will actually have more job security if you increase visibility into your area and make it easier for others to access things because you will build connections with others and they will appreciate you for being a team player. The same goes for Self-Service BI.

The real value that a person provides to their organization is their ability to communicate and connect with others. The easier they can make things for their customers (internal and external), the more valuable they will be to their company. Communication is key and Power Pivot helps us to communicate with data better than ever before. If you are in an organization with an overbearing IT department, please join me in helping to throw off the yoke of your oppressors and entering the age of Self-service BI. Enter the data democracy revolution by employing Power Pivot in your organization.