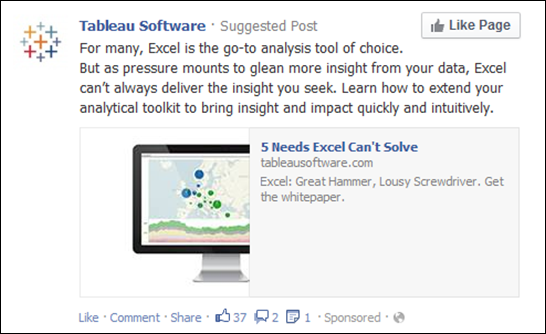 This Picture is a Hint.  An Admittedly Annoying Hint That Hounds me on Facebook.

Actually, no.  It’s not Tableau.  And the Tableau advertisement above basically proves my point.

By far, the biggest “competitor” to Power Pivot is…  Excel itself.

In other words, lack of awareness that Power Pivot even EXISTS is still the biggest “competitor” to Power Pivot today.

So they go right for the throat.  I salute and admire their savvy.  Which brings me to a movie quote.

When Your Competitors Market Like This, What Does it Tell You?

“but they had the strength…the strength…to do that. If I had ten divisions of those men marketers, our troubles here would be over very quickly.”

In a Word:  Ballsy.  This is Genius.  Infuriating Genius, but Genius.

Oh, what are the five things, you ask? Is this going to become a “Power Pivot versus Tableau” article?

Or a comparison, perhaps, of Power Pivot and Power BI versus Tableau?

No, absolutely not.  But I’m glad you asked, since questions like that tend to be good SEO – you know, driving traffic to the cause when people search on that phrase

Let’s get back to the main point here, which consists of two key observations/conclusions.

#1:  Power Pivot Could Basically Be Marketed the Same Way

You could basically take those ads, replace “Excel” with “Excel plus Power Pivot,” “Modern Excel from Microsoft,” or something similar, and re-run them as Power Pivot ads.  They are basically talking about the same cost-curve that I outlined in one of my posts on CIMA: This Diagram Explains How “Normal” Excel as BI “Breaks Down” Over Time,
and How Traditional BI Kills You Up Front
(Click Image for the Full Article) The God-Honest Truth:  Power Pivot Truly DOES Blend the Strengths
(and Negate the Weaknesses) of Traditional BI and Normal Excel.
(I Know.  Bold claims like this rarely turn out to be True, but this one time, it does.)

Continuing that vibe, one of the most popular all-time posts on this site explains “why Excel sucks,” and how Power Pivot fixes that: One of the Most Popular All-Time Posts Explains How Power Pivot Fixes All of These.
(Click for the post, which also contains a link to the slides)

OK, yeah, you’d have to go a little easier on some of the language (you can’t use the word “lousy” and “Excel” in the same sentence), but you get the point.

Oh, and then you’d run the ads on Facebook perhaps.  You know, reach the people directly.

Without exception, every single time I teach Power Pivot to an Excel person, they ask me:

THEM: “when was this released?”
ME:  “almost four years ago.”
THEM:  “NO EFFING WAY.  How could something so amazing stay so quiet for so long???”

Seriously, that happens to me every week.  100% chance.  And they are almost offended, like someone deliberately kept it from them.

Because of this fact, companies like Tableau – who are indeed competitors to Power Pivot – don’t really view Power Pivot as an obstacle to Tableau getting new customers.  They know their biggest competitor is still just Excel itself.

This is 100% fixable.  Maybe not overnight, but in six months a major dent could be made.  Microsoft just needs to, you know, get started.  I was recently told that flossing one tooth every day changes the world.  Bingo. …I’d Like to Thank Paint.NET for Many Years of Image Manipulation

Anyway, it’s good to have a mission in life, and the gap in MS marketing sure is a meaty mission.

So this website, the user groups, the book, even P3 Adaptive University – all are part of said mission.  Yes, some of those things ALSO earn me a living, and it’s nice that “the mission” and “the career” can overlap like this for sure.

I know where this all ends, the only question is how soon do we get there.  If you are reading this, you, personally, are well on your way.  Google Analytics tells me that there will be about 40k of you dropping by this month.  Phenomenal to have you here!

But we still have many, many brothers and sisters lost out there in the cosmos.  Let’s go find them.