Why PowerPivot is Better Fed from a Database, Pt2 - P3 Adaptive In part one I covered the following three benefits of pulling data into PowerPivot from a database, as opposed to using other sources such as Excel itself:

Let’s say you want to stamp your customers into quintiles – the top 20% in terms of dollars spent, the bottom 20%, etc.

And you don’t want that to be dynamically re-calculated every time you slice or filter a pivot – you just want it statically calculated according to total overall sales, so that you can then use the quintile as a slicer or row/column axis in your pivot.  You want to be able to offer a pivot report like this:

To do that, you need a calculated column in your Customers table:

But that’s a reasonably tricky calculated column, as it has to be calculated per-customer, against their matching rows in the Sales table, and then ranked against other all other customers.  If you do that in Excel, you’ve introduced another manual step which foils auto-refresh and in turn introduces more chances for error, etc.

And doing it in PowerPivot is awkward, at least in v1.  I’m not saying you can’t do it in PowerPivot, because you can, and that DOES auto-refresh.  But it’s just so much easier in a database, if you have someone around who knows databases, and there are more complex examples than this one which get even harder in PowerPivot.

This one is both its own distinct benefit as well as a multiplier for other benefits (such as data-shaping and complex calcs).  Anything you do in Excel is manual.  Anything you do in PowerPivot is “tied” to the workbook in which you did it.  But logic that you put in a database can be re-used across many different workbooks.

Which, of course, is very nice.  No need to re-write it every time.  No chance that it accidentally diverges from other models (a source of error).  And if you need to modify that logic in the future, you only have to do it in one place.

This is one of my favorites.  Oftentimes, an organization operates according to a calendar, or even multiple calendars, that are not quite the same as the calendar hanging on your wall.  And that leads you to a place where your measures like “growth versus prior year” can get pretty complex.

I won’t go into great detail here because it would take awhile, but imagine a slicer driven from a table that is purely calculated in the database before input: 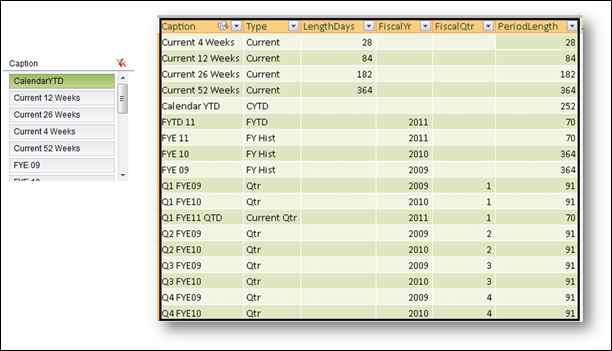 To get a sense of some similar techniques, which revolve around using “unconnected” slicer tables as inputs, see this post and this post.

Better compression means smaller files, less memory consumption, and often faster response times to slicer clicks.  (Note that the bigger the table, the bigger the difference you will see).

Again, deserving of its own post in the future.