Back in June, Kasper posted a trick which lets you detect a user’s selection in a slicer, and use that in a PowerPivot measure.  That’s a very useful trick, one that we employ all the time at Pivotstream.

But sometimes, that is overkill.  Sometimes, you just want to grab a slicer’s selected value and use it in an Excel formula, right there in the sheet.  Here is the simplest method we have discovered so far:

1) Duplicate the field as a slicer AND a report filter 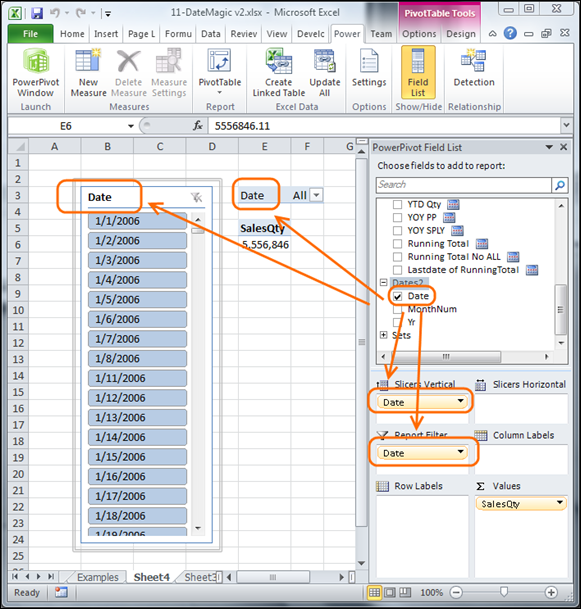 Date Field Dragged to Both Slicer and Report Filter

2) Observe that the Report Filter “Tracks” the Slicer

OK, now click a date in that slicer.  Look what happens to the report filter in the sheet:

Cool huh?  Since they are the same field, the report filter has to always be in synch with the slicer.  And unlike the performance penalty that can pile up with multiple slicers, duplicating a field like this will NOT make your pivot slower at all.

3) Use the Report Filter Cell in a Formula

Yeah, you probably see where this is going already:  now you can reference the report filter cell in a formula, like this:

4) Clean up the visuals

Move the formula to a more centered location, change the font, and hide the row that contains the report filter: 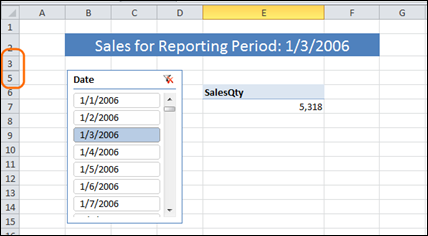 I’ve since posted yet another way to do this that is probably the simplest I’ve personally used to date, and it handles multi select quite well too: